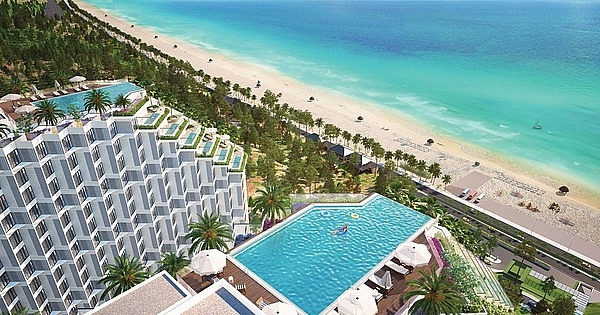 The number of resort projects licenced in the central region was surged with 37 new projects, six times higher than the previous quarter despite of the decrease nationwide. — Photo kinhtechungkhoan.vn

HÀ NỘI — Inventories in the real estate market have been on the decrease thanks to increasing liquidity, according to the Ministry of Construction (MoC).

The ministry recently announced a report on the country’s housing and property market in the third quarter of the year.

Statistics from the ministry showed the total estate inventories of listed property firms in Hà Nội and HCM City by the end of 2019 were estimated at VNĐ18.8 trillion (US$809.9 million). The inventories have been mainly in the high-end segment, condotel, resettlement houses and projects located far from the city centres and lack of synchronous infrastructure.

“However, the investors have been gradually from the beginning of the year,” the ministry said.

The MoC added that figures from 56 out of 63 cities and provinces showed there were 36,884 successful transactions in the real estate market in the third quarter of the year.

Hà Nội and HCM City posted 2,966 and 6,722 transactions respectively in the third quarter, up 119 per cent and 70.6 per cent from the previous quarter.

The successful property transactions were mainly in the mid-end segment while the number of high-end estate transactions fell from the previous quarter.

The ministry said the increasing number of property transactions in the third quarter was because property developers have quickly adapted to the new context while closely following the Government’s support policies after social distancing.

The ministry’s report also revealed the number of licenced tourism and resort estate projects in July-September sharply decreased by 46.7 per cent from the previous quarter.

However, the number of such projects licenced in the central region surged with 37 new projects, six times higher than the previous quarter.

In the third quarter, the country had 49 resort projects with 3,772 condotels, 3,505 tourism villas and 48 officetel apartments.

Notably, no resort projects in the south were licensed in the third quarter. Meanwhile, the region had 78 projects licenced for resort property in Kiên Giang Province alone.

The central region continued to be the bright spot in the market segment despite the COVID-19 pandemic.

The northern region saw stability without big changes as the number of resort projects slightly reduced from the previous quarter.

There were five projects with 332 condotels, 46 officetels and 21 tourism villas licenced in the third quarter, down one project from the previous quarter.

The tourism sector saw recovery signs in the end of the second quarter of the beginning of the third quarter this year as the Government launched the tourism stimulus package, making the number of local tourists surge.

However, the second wave of COVID-19 in July continued to cause shocks for the hotel and resort segments.

The real estate trading activities nationwide have seen improvements with positive signs. There would be stronger recovery in the market in the year-end months, the ministry said. — VNS

Shares gain for third day in a row

Vietnamese chocolate products have chance to enter to global market