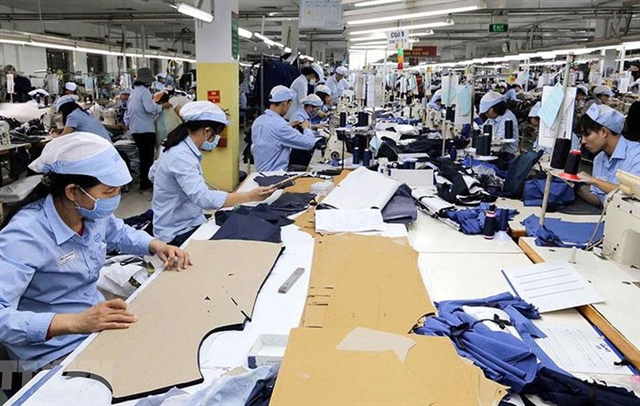 HÀ NỘI — Việt Nam's exports may reach as high as US$313 billion by the end of 2021, a 10.7 per cent increase year-on-year, only if the country manages to stop the spread of the novel coronavirus, according to a report by the Ministry of Industry and Trade.

According to the paper, the Southeast Asian economy's exports in August took a hit, dropping to $53.7 billion, a 5.8 per cent fall from the previous month.

Major exports including agricultural products and minerals saw decreases while rice, one of the country's stronger exports, dropped significantly in both price (by 6.8 per cent) and quantity (by 14.8 per cent) year-on-year.

However, for the first eight months of 2021 Việt Nam posted strong number with a total export/import turnover of $428.8 billion, a 27.2 per cent increase year-on-year thanks to steady and robust growth during the first half of the year.

The US continued to stay at the top as Việt Nam's largest export market, buying goods and services worth up to $212.5 billion, followed by China, the EU, ASEAN, South Korea and Japan.

Imports have also been on the rise with the country's total imports at $216.26 billion for the first eight months of 2021, or a 33.8 per cent increase year-on-year. However, as exports traditionally climb in the last quarter of the year due to stronger demand for consumer goods, the country's trade deficit is likely to shrink by year-end.

Deputy Minister of Industry and Trade Đỗ Thắng Hải said the fourth outbreak of the virus had hit most of the country's major industries and economic centres. Operations in factories and industrial zones that play important roles in the supply chain had been severely disrupted or even suspended.

"Demand in the global market has shown signs of recovery. However, whether Việt Nam will be able to meet that demand entirely depends on how well we manage the virus," he said.

The fourth virus outbreak has paralysed major industrial hubs across the country including HCM City and Hà Nội, Đồng Nai, Bình Dương, Bắc Ninh and Bắc Giang. The outbreak has also triggered a large exodus of workers from big cities, which will likely result in a shortage of workers in the near future.

The ministry said it had been working side-by-side with businesses to work out how to find and penetrate new markets, how to take advantage of numerous FTAs to which Việt Nam is a party. — VNS