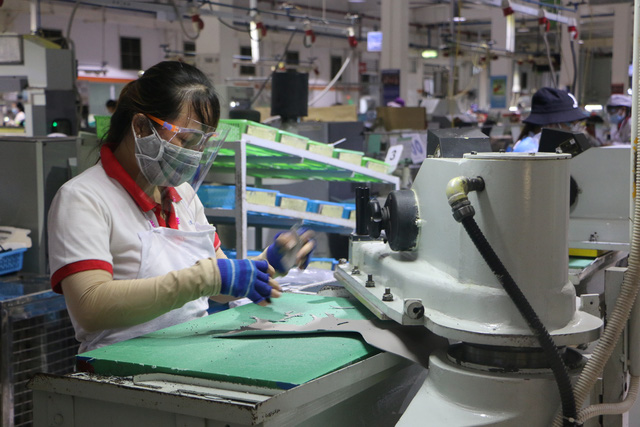 Employees work inside a footwear plant in Long An Province. Around 85,500 businesses across the country have suspended operations in the first eight months of the year due to the COVID-19 outbreak. — VNA/VNS Photo

HCM CITY — Around 85,500 businesses across the country have suspended operations in the first eight months of the year, a year-on-year increase of 24.2 per cent, according to the General Statistics Office.

Of the number, half have temporarily suspended operations while the rest are quitting for good and are completing or have completed dissolution procedures.

The GSO also said 81,600 enterprises have registered to do business in the period, down 8 per cent.

In HCM City, industrial production, retail sales and service revenue all dropped sharply in August from the same period last year and last month, according to the city Statistics Office.

The index of industrial production in the first eight months of the year decreased by 6.6 per cent, it said.

This was due to many factories having to reduce their capacity or stopping work, a disruption of raw material supply and difficulties involved in the domestic and export markets.

Factories in green zones (COVID-free areas) are helped with maintaining production, while workers, especially in industrial parks and high-tech zones, are given priority for vaccination.

The prolonged pandemic has caused difficulties for the operation of companies in the trading and service sectors, it said, adding that people's incomes have decreased, resulting in low demand.

Retail sales and services in the first eight months dropped by 10.6 per cent year-on-year to VNĐ609.4 trillion (US$26.7 billion).

The pandemic has greatly affected the investors' sentiments.