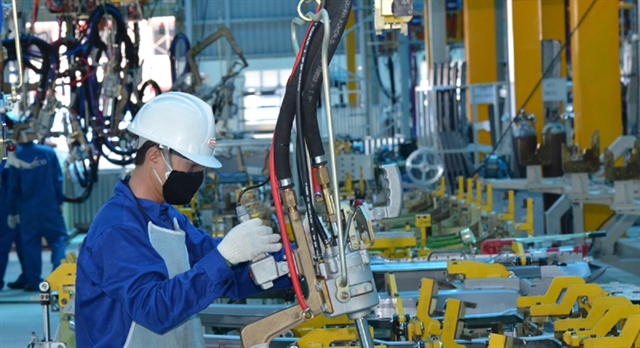 Workers at a factory in southern Bình Dương Province. IIP for the first eight months of the year has increased by 5.6 per cent year-on-year. — VNA Photo

HÀ NỘI — The Index of Industrial Production for August has dropped by 4.2 per cent from July, and a 7.4 per cent decrease year-on-year. However, IIP for the year so far has increased by 5.6 per cent year-on-year.

Commerce, transport and tourism continued to be hit hard by the pandemic, especially since the Government Directive 16 - a string of social distancing measures and restrictions on mobility designed to stop the spread of the virus - went into effect in major cities and provinces across the country.

In August, domestic retail of goods and services dropped by 10.5 per cent compared to the previous month and 33.7 per cent year-on-year. Export-import turnover totalled $53.7 billion, a 5.8 per cent decrease from July. The number of passengers on all modes of transport dropped by 35.9 per cent while goods dropped by 11 per cent.

During the first eight months of the year, exports totalled $212.5 billion in August, a 21.2 per cent increase year-on-year with domestic firms contributing $55.69 billion and foreign firms (including crude oil producers) $156.86 billion.

Việt Nam continued to heavily rely on China for its imports. The country imported $72.5 billion worth of goods and services from its northern neighbour, followed by the Republic of Korea with $34.6 billion, ASEAN with $28.2 billion, Japan with $14.5 billion, the EU with $11 billion and the US with $10.4 billion.

The trade deficit for August reached $1.3 billion, bringing the year's deficit to $3.71 billion.

More than 85,500 businesses closed in August alone, a 24.2 per cent increase from the same period last year, as the country struggled to contain yet another outbreak of the novel coronavirus.

The southern economic hub HCM City was hardest hit with over 24,000 businesses forced to close their doors since strict social distancing measures and mobility restrictions have been put in place in July. In addition, more than 43,000 businesses in the city also had to shutter operations for the foreseeable future.

Public investment has also shown signs of slowing with State capital investment dropping by 7.1 per cent compared to July to VNĐ34.9 trillion and 24.7 per cent from the same period last year.

Foreign investment, however, has seen an increase of 16.3 per cent in registered capital despite a 36.8 per cent decrease in the number of new projects. The average registered capital for a project, consequently, has increased to $10 million, nearly double the figure of 2020.

A number of financial packages have been rolled out by the Government to support citizens and businesses since the fourth outbreak (in late April) including a VNĐ26 trillion package in accordance with government directives 68/NQ-CP and 23/2021/QĐ-TTg. — VNS