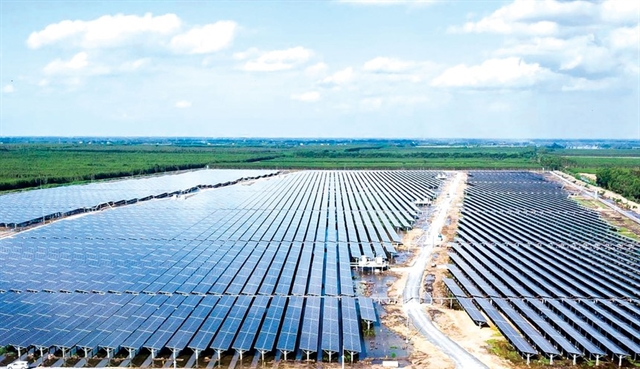 In the first half of this year, the company’s net revenue reached VNĐ1.4 trillion, up 59.7 per cent, with the profit after tax of VNĐ478.3 billion, 17.6 times higher than last year.

In 2020, Việt Nam completed and successfully connected more than 100,000 rooftop solar power systems to the national grid, Phạm Minh Tuấn, CEO of BCG Energy Joint Stock Company (BCG Energy), a subsidiary of BCG, told tinnhanhchungkhoan.vn. The rooftop solar power segment has great potential in the near future on the rising demand for electricity.

BCG Energy will continue to carry out many renewable energy projects to reach the target of 2.0 GW by 2023, while diversifying its investment portfolio with floating solar, wind power and liquefied natural gas to power projects in the future.

During the COVID-19 pandemic, as many industries face difficulties, solar power is still profitable with no payment risk and simple operation management.

With high net profit margin, which is not less than 40 per cent of revenue, the solar power sector contributes nearly VNĐ1 trillion to ASM each year in revenue and nearly VNĐ400 billion in profit.

In the near future, Sao Mai will put the project of solar power exploration on the premises of the enterprise's factory in An Giang into operation and implement the agricultural project under the solar panels.

In the first half of 2021, Sao Mai posted consolidated net revenue of nearly VNĐ6.3 trillion, with profit after tax of VNĐ252 billion.

Sao Mai has just received nearly VNĐ167 billion funded by the Japanese Government after Sao Mai - An Giang Solar Power Plant (phase 3-4 with capacity of 106 MWp) participating in the JCM programme managed by the Ministry of Environment, Government of Japan, to reduce greenhouse gas emissions over 17 years.

This is the first land-based solar power plant in Việt Nam to receive a grant under the JCM programme.

Meanwhile, during the first six months of the year, Trường Thành Development and Construction Investment JSC (TTA) recorded a growth of 95.2 per cent in net revenue to nearly VNĐ331.1 billion. Its profit after tax reached VNĐ76.7 billion, up nearly 82 per cent over last year.

In its statement to the Sate Securities Commission of Việt Nam, the company said that the growth was contributed by revenues from two new plants, including Pá Hu Hydropower Plant, starting operation in the fourth quarter of 2020, and Núi Một Lake Solar Power, on air in January 2021.

Moreover, the weather conditions as well as the transmission system are more favorable compared to the same period last year.

Phương Mai wind power plant invested by Trường Thành was put into operation in the second quarter of 2021.

Of which, Trường Thành is particularly interested in Phước Hoà pumped storage hydropower project with a capacity of 1,200 MW.

HID shares of Halcom Vietnam inched 10.3 per cent higher during the period. Halcom has just issued a resolution of the Board of Directors on increasing the ownership rate at VKT - Hoà An Solar Plant JSC.

LIG shares of Licogi 13 JSC jumped by 17.4 per cent. It has just approved the transfer of 100 per cent of capital in Quảng Trị Solar Power Company Limited to VN Green Holdings, a unit from Singapore. The transfer is worth more than VNĐ456 billion.

Nguyễn Hữu Quang, Director of Clean Investment of Dragon Capital, said that the dividend rate can be from 9 to 10 per cent each year if investing in renewable companies. Việt Nam’s renewable electricity sector is attracting large capital inflows from abroad.

Currently, a hydroelectric project has an investment period of 3 - 5 years and a thermal power project takes nearly 10 years, while it takes less than a year for solar power plant with a capacity of 50 - 10 MW to be put into operation.

Renewable energy is a field with almost no risk of market fluctuations, demand as well as exchange rates, Quang added.

Developing renewable energy is an inevitable trend of the world, while the electricity demand in Việt Nam keeps rising, promising a brighter future for the industry. — VNS