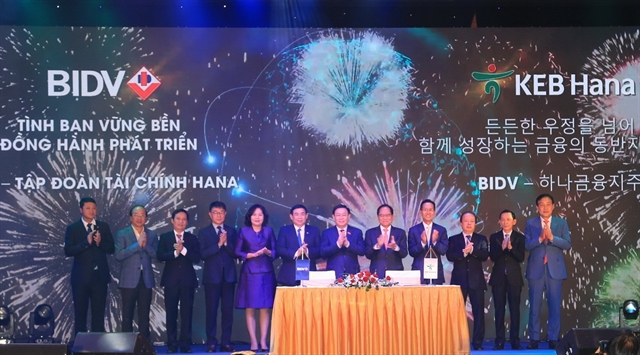 The signing ceremony between BIDV and KEB Hana Bank in November 2019. — Photo bidv.com.vn

However, the global markets have been hit by the COVID-19 pandemic, so it is difficult for foreign investors to hunt Vietnamese banking shares at the moment, he said, cited by tinnhanhchungkhoan.vn.

So the banks lock their foreign ownership ratios to wait for the opportunities to come and keep their shares from the market volatility, Minh said.

Among those banks making the move was the Việt Nam Technological and Commercial Joint Stock Bank (Techcombank), which capped its foreign capital ratio at 22.5 per cent.

Among others, VietCapital Bank and NamA Bank are discussing similar ideas with shareholders.

Techcombank shares (HoSE: TCB) have gained as much as 32.6 per cent since July 30 to touch the six-month high of around VNĐ24,000 apiece.

According to bank officials, the banks will not sell their shares on the market at any cost and they will select the buyers carefully.

Under Decree 01/2014/NĐ-CP, a foreign investor cannot own more than 20 per cent of a Vietnamese financial institution and the total ownership among all foreign investors cannot exceed 30 per cent.

Some Vietnamese banks have completed selling stakes to foreign buyers but many of them still have room to welcome overseas investors.

On the other hand, the European Union-Việt Nam Free Trade Agreement (EVFTA) may facilitate European financial firms to penetrate Vietnamese market. One of the key things under the trade pact is European investors may increase their ownership ratios to maximum 49 per cent in two Vietnamese banks.

In the last five years, the Vietnamese market has seen more share purchasing deals between foreign investors and local banks.

Foreign investors had done buying shares at Techcombank, HDBank and TPBank before those banks were listed on the stock market.

Shares gain for third day in a row

Vietnamese chocolate products have chance to enter to global market