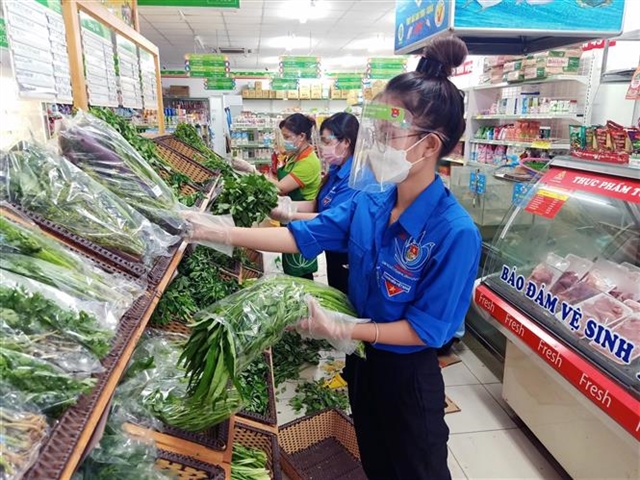 Members of the special task forces shop on behalf of residents in HCM City on August 24. VNA/VNS Photo

HCM CITY — Special task forces in wards in HCM City that do grocery shopping for locked-down residents took 74,033 orders to supermarkets and groceries stores on August 24, almost half more than the previous day, according to the city Department of Industry and Trade.

The numbers are expected to increase sharply in the coming days, it said.

Amid the city’s stricter COVID-19 prevention measures from August 23 to September 6, people have been told to “stay where they are” and task forces comprising members of local logistics teams, community COVID prevention teams, local volunteers, police officers, and troops are helping them buy their daily needs.

In Tân Phú District, they sent 8,000 orders on Tuesday to supermarkets and grocery stores compared to only 500 the previous day.

Nguyễn Công Chánh, deputy chairman of the district People’s Committee, said, “The district has worked with retailers in the area …to ensure that goods are ordered and delivered as quickly as possible."

With 250 people in each ward on the task forces, they do not merely buy goods for the public but even compare prices between various retailers to choose the most competitive.

Chánh said: "The district strictly prohibits travel, meaning supermarkets and stores can only sell goods to the special task forces. On August 23 [officials] sanctioned a number of shops that sold goods to people who came to shop in person.”

Nguyễn Duy An, vice chairman of the District 1 People's Committee, said of the 10 wards with 50,000 households, some such as Cô Giang and Cầu Kho have almost no supermarkets or shops, and providing goods to people there has faced difficulties.

"The wards have set up teams that do the grocery shopping for residents. The teams record orders through Zalo or links. They then pool orders and send them to suppliers.”

Although supermarkets such as Co.opmart, Co.op Food, Satra, and Bách Hóa Xanh have promised to ensure sufficient supply of goods, the district still plans to organise 20 mobile sales trips each week, with priority given to wards that do not have large supermarkets, he said.

Since the purchase orders are signed by ward chairpersons, the task groups could take delivery of goods and make payments later, she said.

Co.opmart Huỳnh Tấn Phát in District 7 also accepts orders via phone, online and on Zalo from people living in green zones (COVID-free areas), and staff with travel permits deliver them.

A Saigon Co.op spokesperson said a price list for around 100 essential items and combos priced from VNĐ100,000 are sent to local authorities in each area.

Task forces assigned by the authorities will collect orders from households and pool them. Saigon Co.op would then coordinate with local authorities to deliver goods to collection points so that task forces can send them to buyers as quickly as possible.

The Department of Industry and Trade on August 24 has warned about scammers who ask people to transfer money in advance and offer to make shopping convenient.

"To avoid being conned, people should contact the residential group’s leader, local Women's Union or ward union to register for shopping."

Supermarkets in districts where inter-district deliveries are not prohibited have seen online orders skyrocket, but can only meet 10 per cent of demand due to limited human resources.

In the remaining districts they are allowed to operate but cannot cross district borders. — VNS