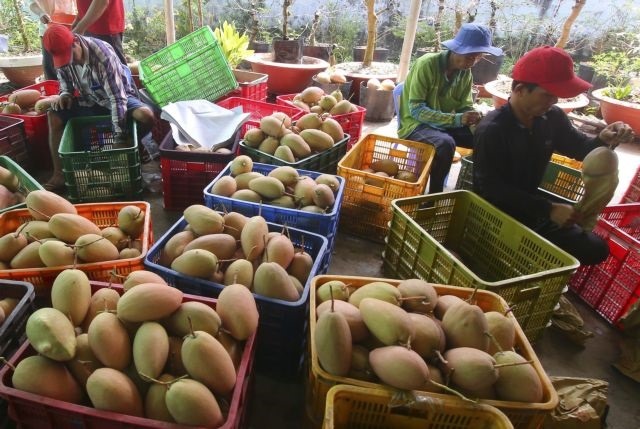 Cát Hồng mango of Hậu Giang Province. Export of vegetables and fruits to Australia brought in $46.5 million for Việt Nam in the first seven months of 2021. — VNA/VNS Photo Duy Khương

HÀ NỘI — Việt Nam raked in US$60 million from exporting vegetables, fruit and rice to Australia in the first seven months of this year, a surge of 45 per cent compared to the same period last year.

Vegetables and fruit brought in $46.5 million while rice fetched $13.2 million, up over 45 per cent and 37 per cent year-on-year, respectively.

Nguyễn Phú Hòa, head of the Việt Nam Trade Office in Australia, said that the agency has actively implemented digitisation of business support activities in the context of the COVID-19 pandemic, including launching an application to connect Vietnamese businesses and localities with Australian partners, and organising large-scale online exhibitions.

It has also supported Vietnamese enterprises in promoting their products among the Vietnamese community in Australia and called on overseas Vietnamese to use made-in-Việt Nam goods.

These efforts of the office and domestic exporters have turned out positive results.

Notably, the export turnover of dragon fruit – one of four fresh fruits of Việt Nam allowed to be exported to Australia – hit nearly $29 million, up over 84 per cent year-on-year.

According to the Việt Nam Trade Office in Australia, it has coordinated with importers in Australia to hold a programme themed “Việt Nam - the land of the best rice in the world” from August 8 to September 27 in Melbourne, Perth and Sydney in order to further promote Vietnamese rice in the market.

In addition to traditional fresh farm produce, a number of other frozen agricultural products and vegetables have also started to make inroads into Australia.

In the first six months, Việt Nam's frozen ginger exports to the largest market in Oceania grew by 988 per cent over the same period last year, reaching $642,000.

Most recently, 22 tonnes of frozen dracontomelon worth over VNĐ6 billion (nearly $263,000) were also shipped to the market. — VNS

SABECO strengthens commitments for growth and sustainability of Việt Nam