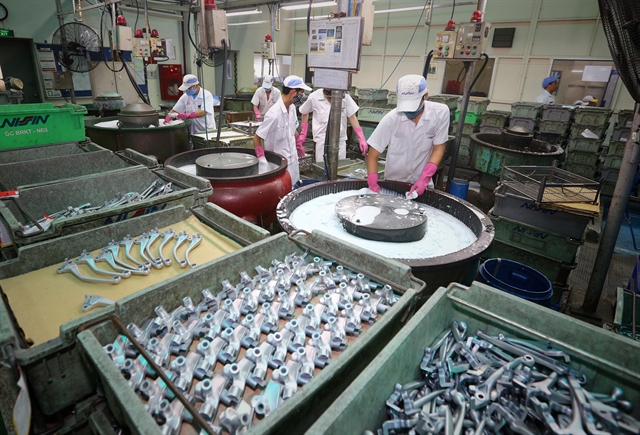 A brake production line at the Japan-invested Nissin Brake Vietnam Co in the northern province of Vĩnh Phúc. Japanese investment to Việt Nam saw a significant yearly increase of over $3.2 billion in the first eight months of 2021. — VNA/VNS Photo Danh Lam

HÀ NỘI — Foreign direct investment (FDI) disbursement to Việt Nam topped US$11.58 billion in the first eight months of 2021, up 2 per cent year-on-year despite the COVID-19 pandemic seen in many localities, according to a report from the Ministry of Planning and Investment.

Up to 1,135 new projects were licensed in the period, down 38 per cent against the same period last year. However, total registered capital was up 16.3 per cent to nearly $11.33 billion.

Meanwhile, about 640 existing projects were allowed to raise their capital by $5 billion, marking a yearly decline of 11 per cent in terms of number of projects but an increase of 2.3 per cent in the level of capital, the report noted.

During this period, capital contributions and share purchases by foreign investors fell 43.4 per cent to $2.81 billion.

Among 18 sectors that have received foreign capital from January to August, manufacturing and processing absorbed the largest amount with $9.3 billion, making up 48.4 per cent of the nation's total FDI inflow. Electricity production and distribution came second with $5.5 billion or equivalent to 28.7 per cent. Real estate, wholesale and retail were the runners-up with $1.6 billion and $734 million, respectively.

The report added that out of 92 countries and territories investing in Việt Nam during the period, Singapore took the lead with more than $6.2 billion, accounting for nearly 32.5 per cent of the total FDI registered in the country. However, the total investment of Singaporean investors plunged 5 per cent year-on-year.

Japan came next with over $3.2 billion, up 95 per cent year-on-year, making up 16.8 per cent of the total FDI, while South Korea ranked third with $24 billion, down 18 per cent or equivalent to 12.7 per cent. Other leading sources of Việt Nam's FDI were from mainland China, Hong Kong and Taiwan.

The Mekong Delta province of Long An lured the lion's share of FDI with over $3.6 billion or 19 per cent of the total thanks to the Singapore-invested Long An liquefied natural gas power plant project worth $3.1 billion. It was followed by HCM City with about $2.2 billion or 11.4 per cent and Bình Dương Province with $1.7 billion or 8.7 per cent.

However, big cities with sufficient infrastructure such as HCM City, Hà Nội and Bắc Ninh won in terms of the number of projects. Among them, the southern economic hub led the country in the number of new projects, making up 34 per cent while the capital city ranked second, making up 21.5 per cent though it was not among the top five localities attracting the largest amount of FDI in the eight-month period.

Previously, the UN Conference on Trade and Development (UNCTAD) World Investment Report 2021 revealed that Việt Nam was named among the world’s top 20 host economies for FDI for the first time in 2020 with an inflow of $16 billion.

The country was up five places against last year’s ranking to reach 19th on the list, according to the report.

It stated that Việt Nam remained among the three largest recipients in the region with a decline of only 2 per cent, while the remaining two of Singapore and Indonesia suffered drops of up to 21 per cent and 22 per cent respectively.

According to UNCTAD, a slight decline in FDI to the country was due to significantly lower investment in manufacturing and realty activities.

However, thanks to the rise in investment in electricity projects, including a $5 billion gas-fired power plant proposed by ExxonMobil (US) and a $2.2 billion coal-fired power plant developed by Thai MNEs in the Quảng Trị Economic Zone, the flow of FDI was still solid.

UNCTAD pointed out local measures to promote investment, including the permission for certain disputes between foreign investors and the State to be taken to international arbitration, were keys to attracting FDI inflows.

The report also said the Vietnamese government had expanded the list of business lines eligible for investment incentives, along with publishing a detailed list of conditions applied for businesses to be considered high-tech enterprises eligible for tax incentives as good points.

“Việt Nam for the first time introduced a negative list on market access, affording foreign investors with national treatment except in the sectors included in that list. The country also raised the cap on foreign ownership in domestic airlines.”— VNS