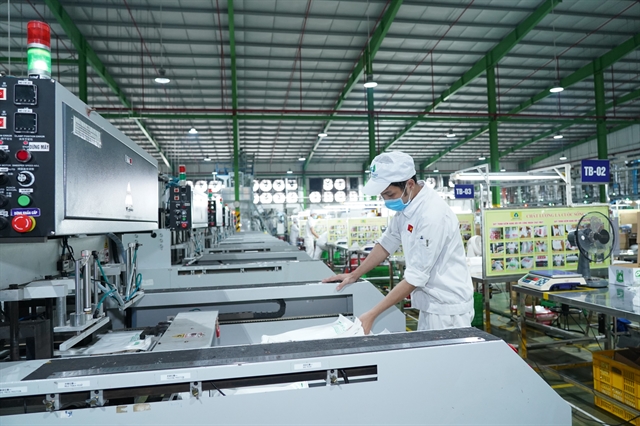 A plastic production line at the factory of An Phát Bioplastics JSC (AAA). AAA rose 4 per cent on Friday. Photo courtesy of AAA

HÀ NỘI - The market finished higher in the last trading session of the week as large-cap stocks gained points, while foreign investors net sold large values on both exchanges.

The market breadth was positive as 260 stocks rose while 115 stocks fell.

During the session, local investors poured over VNĐ21.4 trillion into the southern bourse, equivalent to a trading volume of more than 685 million shares.

The gains in pillar stocks were the main driving force for the market. The VN30-Index rose 0.43 per cent to close Friday’s trade at 1,418.57 points.

Twenty-one of the 30 biggest stocks in the VN30 basket inched higher on Friday while eight stocks declined.

On the other side, HDBank (HDB) was the biggest loser with more than 1 per cent decrease.

On a sector basis, most of the industries maintained their growth momentum in the last session of the week. Plastic - chemical production, healthcare, rubber products and agriculture - forestry - fishery all increased by more than 3 per cent.

During the session, nearly 133.8 million shares were traded on the northern bourse, worth nearly VNĐ3 trillion. VNS