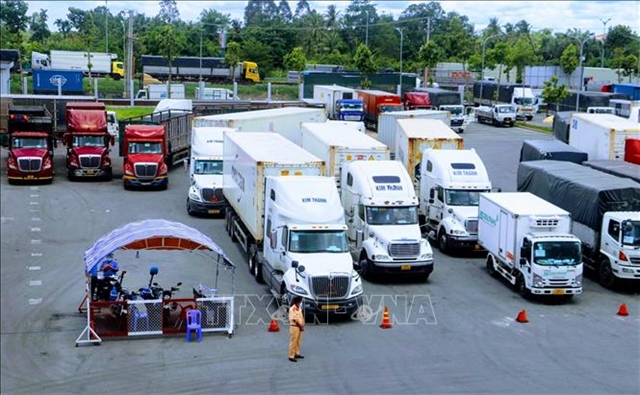 Trucks are congested in Can Tho because of local regulations on travel in COVID-19. _ VNA/VNS Photo Thanh Liêm

HÀ NỘI — Amid difficulties from the pandemic, some local enterprises say they are further troubled by additional regulations concerning the circulation of goods in southern Cần Thơ City during the lockdown.

On Tuesday, local media reported that dozens of trucks carrying essential goods heading to Cần Thơ from HCM City were stuck at Cần Thơ checkpoint due to regulations that stated vehicles carrying goods must be registered in advance with the local department of Industry and Trade.

Among those stopped, some insisted they had already registered with the department but had not received any confirmation.

At the same time, vehicles that had registered for the green lane, using QR codes and transiting through Cần Thơ City, claimed they also had difficulties and were held up for more than a day.

A representative of the enterprises said: “It is very time consuming and costly.”

On Monday, Cần Thơ authorities said all vehicles transporting goods from other provinces and cities to the locality must be registered in advance.

Responding to the comments of businesses, a leader of the department said due to the large number of registrations, some requests could not be resolved in time.

At the same time, the leader asked enterprises to understand local regulations do not allow drivers from other places to enter, to ensure the city is safe and limit the spread of disease..

The Ministry of Industry and Trade (MoIT) stated that Directive 16 strengthening travel control measures to prevent the spread of the virus did not mean to create additional rules hindering the circulation of goods.

In order to ensure timely and smooth transportation at all times and places, article No 9, Section II of the official dispatch No. 1102/CD-TTg signed by Prime Minister Phạm Minh Chính on Monday, states: “Localities must strictly follow the direction of the Prime Minister with the spirit of checking goods at departure and destination points and ensuring safety regulations for pandemic prevention and control and immediately abolish the unsuitable regulations.”

On Tuesday afternoon, MoIT sent an express document requesting the Ministry of Transport to issue regulations on transport that would be uniformly implemented in localities during the lockdown period.

MoIT added that  it was receiving a lot of feedback from a number of businesses facing difficulties in transporting and circulating goods in the provinces and cities due to directive 16/CT-TTg.

On Wednesday, MoT minister Nguyễn Văn Thể met with all provincial departments and representative from relevant ministries on the matter.

He told the online meeting: “No transit at all is recommended. If Hải Phòng and HCM City have tens of thousands of trucks heading to ports every day like Cần Thơ, how could the work be processed?"

Thể suggested Cần Thơ reconsider the introduction of such regulations that are not applied elsewhere in Việt Nam, saying: "Any regulation that creates additional procedures and difficulties must be abandoned."

"Any more congestion can cause a potential reservoir for a contagious virus," he added, suggesting all localities give priority to vaccination of drivers.

Local media yesterday still reported that trucks were waiting at checkpoints in Cần Thơ where leaders of the province were still considering a solution.

According to local media, Chairman of Cần Thơ City Trần Việt Trường is working on a report about the issue to the Prime Minister. — VNS