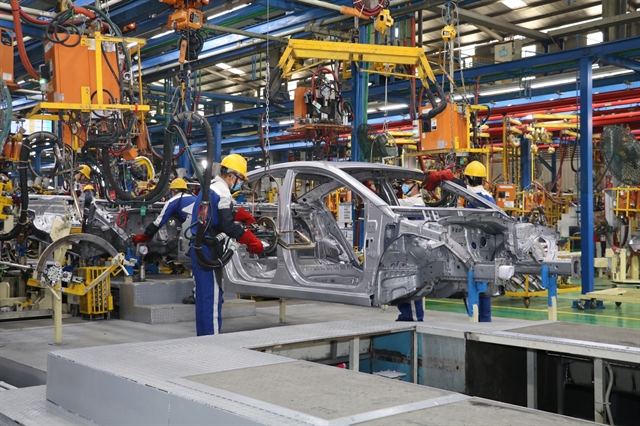 HÀ NỘI —  Domestic automobile manufacturers have urged the Ministry of Finance to revise criteria for production capacity so as to enjoy a preferential tax incentive policy for imported automobile parts.

Most local auto assemblers and manufacturers complained that the strong decline in purchasing power amid the pandemic has made it more difficult to maintain the minimum production capacity to enjoy the tax incentive.

Tax incentives for imported auto parts are generally one of the most important preferential schemes for automobile manufacturers in Việt Nam, enhancing competitiveness for local car assemblers. However, production capacity is one of the main criteria for local companies to enjoy the policy.

Việt Nam introduced a decree which grants a five-year zero per cent import duty for automobile parts that have not been domestically manufactured but are imported into the country for car assembly and manufacturing.

Việt Nam continued its support of the automobile industry by granting an import duty of zero per cent in May 2020 for imported parts and materials used by automobile supportive industries until 2024.

According to industry insiders, the tax incentive could help enterprises increase production capacity, set plans to continue to invest in new production lines and resume production and reassemble a number of models that had previously ceased production in Việt Nam.

The Vietnam Automobile Manufacturers Association (VAMA) reported that in July alone, car sales volume reached only 16,000 vehicles, a decrease of 32 per cent compared to June.

Many car assemblers and manufacturers have suffered from a sharp decline in sales volume in July and August due to the rapid occurrence of the COVID-19 pandemic in HCM City and neighbouring provinces.

Up until the end of 2020, the auto industry had 40 automobile assemblers and manufacturers with a designed production capacity 755,000 unit per year. Last year, some 323,892 unit were locally assembled and manufactured.

According to local car manufacturers, a series of decrees enacted in 2016, 2017 and 2020 were aimed to create technical barriers to protect the local auto market amid the fierce competition from imported cars in Việt Nam being fuelled by various bilateral and multi-lateral trade agreements.

At the regional level, Việt Nam has removed import tariffs on cars from ASEAN countries since 2018 as part of their ASEAN Free Trade Agreement commitments.

Despite the current pandemic, the number of vehicles imported to Việt Nam in July 2021 still hit a high figure. The number of completely-built-up (CBU) vehicles imported, was estimated at around 17,000 vehicles with a turnover of US$332 million, according to the General Department of Vietnam Customs.

In the first seven months of 2021, the number of CBU cars imported to Việt Nam reached about 98,000 units with a total turnover of US$2.1 billion – an increase of 116.9 per cent in volume and 111.4 per cent in turnover year-on-year. Việt Nam mostly imports cars from Thailand and Indonesia that account for 80 per cent of the total import volume of CBU cars.

If no timely interference and removal of barriers for minimum production capacity are conducted, local automobile assemblers will face a hard time as purchasing power has not recovered due to the pandemic.

Phạm Văn Dũng, general director of Ford Vietnam, said that domestic automobile manufacturers had not yet met the price competitiveness factor because most of the components and accessories were still imported.

Only a few spare parts are produced domestically, but the production capacity is not large enough to ensure a good price. The cost of producing and assembling cars in Việt Nam is about 20 per cent higher than that of other countries in the region.

To deal with many opportunities and challenges amid COVID-19, the Ministry of Finance has recently asked the Government to continue the extension of the special consumption tax on locally manufactured auto parts and components until the end of 2021, a move which could reduce prices of locally assembled vehicles.

The Ministry of Finance has also proposed the Government to halve registration fees for domestically manufactured electric cars for five years starting from 2022. However, the proposal is awaiting for approval.

Between 2018 and 2020, the Government issued a number of preferential policies on import tax for auto components and raw materials and supplies for auto production. These contributed to ironing out issues and promoting domestic production with supporting industries for the automobile industry. — VNS