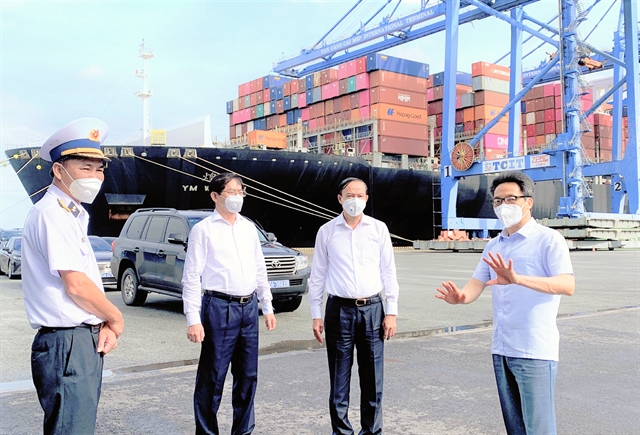 HCM CITY – Thanks to the adoption of drastic COVID-19 prevention measures at ports, the volume of goods that passed through ports in the first eight months of the year increased by 18 per cent year-on-year to 16.8 million TEUs, the Việt Nam Maritime Administration said.

With 3.2 million TEU, the Cái Mép - Thi Vải Port Cluster in Bà Rịa-Vũng Tàu Province accounted two thirds of the imports and exports in the south and 100 per cent of shipments from and to the US.

Amid the COVID-19 outbreak in many southern provinces and cities, port authorities have been adopting many preventive measures like keeping its employees on site and testing them all every three days.

Nguyễn Xuân Kỳ, general director of the Tân Cảng - Cái Mép International Terminal Company Limited, said thanks to the strict implementation of prevention and control measures, some COVID cases were detected in time and immediately isolated.

But after more than two months the model has also revealed certain limitations, he said.

The cost for the "three on-site" model and the periodic COVID-19 test fee for more than 350 company employees, up to more than VNĐ1 billion ($44,000) a week, are causing many difficulties for businesses, Kỳ said.

Keeping the workers at the port and not allowing them to go home for a long time also adversely affects their psyche, directly affecting productivity and safety, he added.

His company has called on the province People's Committee to allow the adoption of other solutions such as allowing local employees living in areas with little or no COVID cases to go home. – VNS