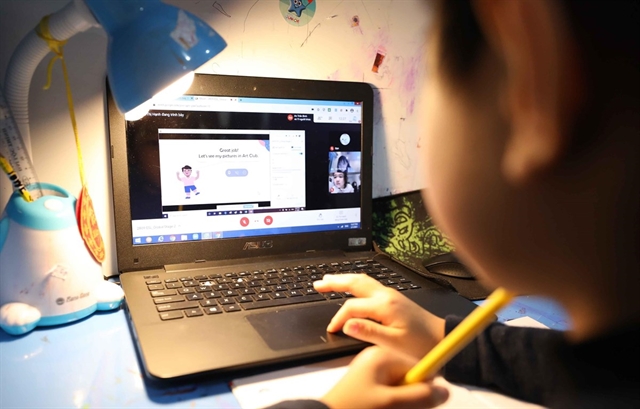 A student attends a virtual classroom via his laptop. VNA/VNS Photo

Thousands of families with school aged children in HCM City are striving to cope with the financial burden of their education as the new school year starts amid the severe income loss caused by the prolonged COVID-19 pandemic.

In normal circumstances, spending on education used to account for a majority of households’ total expenditure.

A survey by the Ministry of Planning and Investment in 2016 found that household spending on education in the country accounted for more than 30 per cent of their total income on average.

This rate was even higher in HCM City at around 36.5 per cent, with households spending around VNĐ3.4 million (US$1.478) for a child per month.

In recent years household incomes in HCMC have improved significantly, encouraging people to spend more, especially on their children’s education.

Experts said household incomes have always had a major influence on the decision to spend on children’s education.

So the pandemic’s impact on incomes has made people’s financial spending on education be seriously affected.

So far this year 85,500 businesses have shut down, half temporarily and the rest for good, according to the General Statistics Office. HCM City has accounted for 24,000 of them.

According to the International Labour Organisation, Việt Nam’s per capita income reduced by 5-8.4 per cent after the previous waves of COVID-19.

Freelance workers’ incomes saw a steeper fall than those of full-time workers’.

The unemployment rate is the highest in 10 years at 2.73 per cent.

Analysts said the fourth wave of COVID that began in May resulted in lockdowns and movement restrictions in several provinces and cities.

As HCM City has been the hotspot in the current outbreak, some 230,000 self-employed and informal workers in the city have lost their jobs and incomes. Employees have also seen their incomes decrease sharply, according to the Department of Labour, Invalids and Social Affairs. More than 47,500 workers have been laid off.

But while households’ incomes decreased, their spending on children’s education increased because most students have been studying online, requiring them to buy not only books and other normal stuff but also costly devices like laptops and desktops.

This extra financial burden has become a major problem.

Before the outbreak, HCM City, despite being the country’s biggest economic hub, had 49.48 per cent of its population earning less than VNĐ10 million ($435) a month and only 9.36 per cent earning over VNĐ15 million.

The pandemic has dealt an enormous blow to incomes.

Consequently, of more than 1.3 million students from the primary to high school level in HCM City, 77,000 lack either access to the internet or electronic devices to study online, according to school surveys requested by the city Department of Education and Training.

Analysts said it is therefore necessary to have support measures for households that have school-aged children to ensure their studies are not affected.

Several countries around the world have already rolled out policies to support education, including Thailand.

According to a Bangkok Post story, the Thai Government approved a 23 billion baht relief aid for families whose children attend primary and secondary schools.

Parents will get 2,000 baht per child to help pay their fees, and subsidies will be granted to schools, particularly private ones, to meet expenses.

The US has earmarked $105 billion for schools under a proposed GOP coronavirus relief package, according to news site The Hill.

Rich-poor gap widens due to outbreak

The gap between the rich and the poor is an inherent problem in many countries, especially developing ones like Việt Nam.

According to a report by the Ministry of Labour, Invalids and Social Affairs, in 2018 the average income of the richest 20 per cent of the population was 10 times that of the poorest 20 per cent.

The income gap resulted in a big gap in access to basic services, markets and employment, especially in the northern mountains and Central Highlands.

A high-ranking Government official admitted that despite the country’s progress in reducing poverty and narrowing this gap, there is still a long way to go.

The pandemic has undone some of the gains achieved world-wide including in Việt Nam due to strict social distancing measures and sharp increase in joblessness.

In HCM City, around four million people have lost their jobs or had their incomes severely hit.

The low-income group has been the hardest hit as it mainly includes unskilled and informal workers and those working in factories, many of which have been required to suspend operations for a long time.

Figures from the General Statistics Office show that the number of working age people who are jobless or are underemployed has been increasing steadily.

The industrial production and construction sectors and informal and unskilled workers saw the biggest decreases, down to zero in many cases.

But a majority of high-income earners have been able to work from home, meaning their incomes have remained unaffected while their spending has fallen sharply due to restrictions on movements.

According to the General Department of Taxation, tax revenues in the first half of the year were around VNĐ656.374 trillion, equivalent to 58.8 per cent of the full-year target and 14.3 per cent up year-on-year.

Personal income tax payments increased by 12.8 per cent and reached 67.7 per cent of the year’s target. Taxes paid on stocks, personal investments and real estate were up 2.91 times, 78.2 per cent and 68.8 per cent. VNS