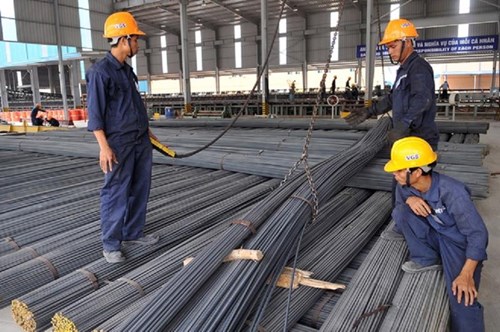 Việt Nam's steel exports reached 658,207 tonnes in the first seven months of this year, an increase of 5.96 per cent month on month. Photo vinanet.vn

HÀ NỘI — Steel enterprises have boosted exports while facing difficulties in domestic consumption due to the COVID-19 outbreak, according to the Vietnam Steel Association (VSA).

The association said steel production in July reached nearly 2.4 million tonnes, down 6.48 per cent compared to the previous month, while steel consumption was about 2.1 million tonnes, the same volume in June and up 7.4 per cent year on year.

Trang Thu Hà, chief of VSA Administrative Office, said the domestic steel industry has faced difficulties in production and sales due to the impact of the COVID-19 pandemic and the weather.

Construction work was temporarily postponed in the first seven months of the year, leading to difficulties in the domestic steel market, especially in the southern region.

Construction steel sales in the first seven months increased by 6.4 per cent year on year, of which, exports rose by 25.4 per cent.

The Hòa Phát Group's galvanised sheet and steel pipe products also recorded a strong increase because of the recovery in demand of those products in the US and Europe.

Due to the difficulties in the steel product consumption in the domestic market, steel enterprises have promoted steel exports to maintain production.

Hà said that in 2020, the domestic steel production industry maintained operations due to good control of the pandemic.

However, with the complicated development of the outbreaks this year, many provinces and cities have been implementing social distancing measures and even had to stop temporarily many activities, weakening the domestic market demand in June and July.

“Therefore, the association forecasts that steel consumption in the third quarter will not be better. The business result in the fourth quarter will also depend on the pandemic prevention and control," Hà told the Vietnam News Agency.

With the complicated development of the pandemic in the southern provinces and cities, the association expects that steel production and consumption by year-end would continue to see difficulties, she said.

However, "domestic consumption and steel exports could recover further by the end of this year if the pandemic is controlled well at home and abroad," she said.

Meanwhile, the Ministry of Industry and Trade has requested the association and enterprises producing and exporting iron ore, iron and steel to review input materials for reducing production costs and selling price in the process of stabilising steel production and the domestic steel market at present. — VNS