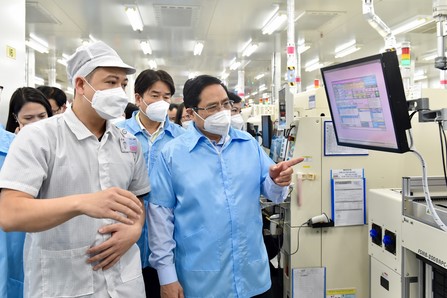 At a working session there, Chính said Việt Nam is stepping up vaccine strategy, including importing, facilitating technological transfer and producing vaccines at home as well as speeding up vaccinations for all people, including workers at Samsung.

He suggested with its prestige, Samsung raise a voice to the Government of the Republic of Korea and partners to help Việt Nam get vaccines to implement its strategy.

The PM also wished the firm would increase the rate of domestically-made items and export value in the near future. He proposed Samsung enhance the transfer of technology and management capacity to Việt Nam, as well as create favourable conditions for Vietnamese to be among senior leaders in its factories in Việt Nam.

The leader pledged to always listen to the aspirations of enterprises, including foreign-invested ones and Samsung in particular. He wished they would work closely with authorities at all levels to do more successful business in the country.

According to CEO of Samsung Vietnam Choi Joo-ho Samsung now has six factories in the country with an investment capital of US$17.7 billion and 38,000 workers. It is building a research and development centre in Hà Nội, which is expected to be operational in late 2022 and draw 3,000 engineers.

Secretary of the provincial Party Committee Nguyễn Thanh Hải said in the first half of this year, the province’s gross regional domestic product grew by 6.5 per cent. With $18.66 billion from exports during the period, Thái Nguyên was among five provinces nationwide with the highest earnings.

Its total State budget collection surpassed VNĐ10.2 trillion, up 15.7 per cent year-on-year, or 65.4 per cent of the year's target.

Notably, the province provided all level-4 administrative procedures on its public service portal. It was also among 10 provinces nationwide to pass through 14 days without new COVID-19 cases. VNS