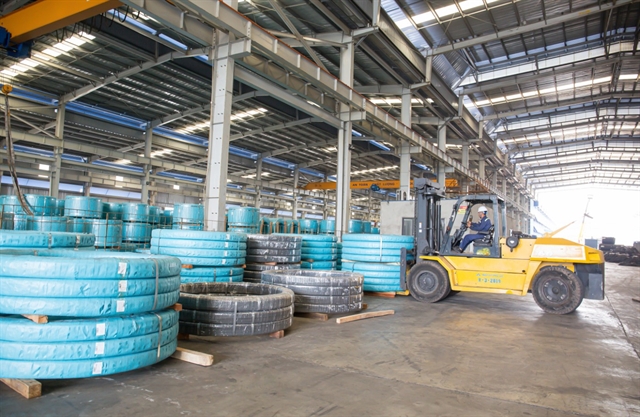 A worker inside a warehouse of Hoà Phát. The company's shares jumped more than 4 per cent yesterday, leading the market's uptrend. Photo hoaphat.com.vn

The index rose 1.63 per cent last week. It climbed for three straight sessions before the market closed for the four-day National Day holidays starting on September 2.

The market’s breadth was positive with 300 stocks increasing, while 106 stocks declined and 42 stocks ended flat.

The liquidity was also high as investors poured over VNĐ28.2 trillion (US$1.23 billion) into the southern bourse, equivalent to a trading volume of more than 944.4 million stocks.

The index extended rallies on the back of large-cap stocks in most sectors.

Hoà Phát Group (HPG) was the leading stock on Monday as it gained 4.07 per cent. It was followed by Vinhomes (VHM), PetroVietnam Gas (PVGas, GAS) and Vingroup (VIC). These stocks jumped in a range of 0.96 - 2.03 per cent.

Information technology (IT) and bank stocks also contributed to the market’s uptrend. Of which FPT Corporation (FPT) surged 2.7 per cent, Techcombank (TCB) rose 1.35 per cent, Vietcombank (VCB) was up 0.6 per cent and MBBank (MBB) increased 1.43 per cent.

However, the index’s gain was capped by losses in some big stocks like Masan Group (MSN) and Vietnam Rubber Group (GVR), with these two stocks reporting losses of more than 1.6 per cent.

In a monthly report, HoSE said that the market liquidity on the exchange was improved compared to the previous month, and hit a record high on August 20 with a trading value of nearly VNĐ30 trillion, equivalent to a trading volume of nearly 1.2 billion shares.

This is the largest trading session in the past 21 years.

During the session, over 194.8 million shares were traded on the northern bourse, worth VNĐ3.8 trillion.

Meanwhile, foreign investors continued to flee from the market as they net sold a total of VNĐ343.85 billion on both main exchanges.