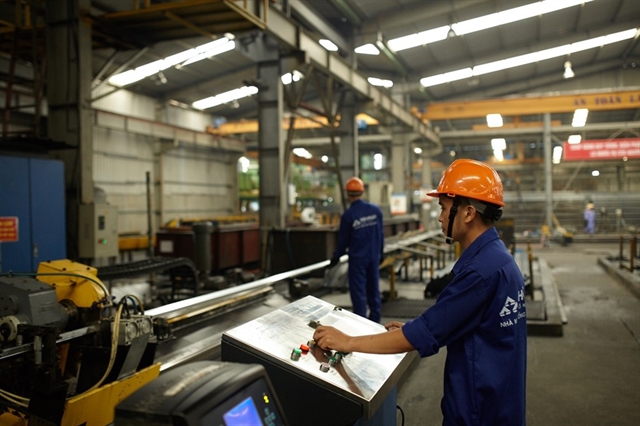 A worker operates a steel pipe production line at a factory of Hoà Phát Group. Hoà Phát Group (HPG) was one of the three strongest supporters of the VN-Index last week. — VNA/VNS Photo Đức Dũng

The benchmark VN-Index on the Hồ Chí Minh Stock Exchange (HoSE) rose 0.69 per cent to close Friday at 990.00 points.

An average of 480 million shares were traded on the southern exchange during each session last week, worth VNĐ9.7 trillion (US$418 million).

According to SSI Securities Joint Stock Company (SSI), although the market recorded positive movements in terms of scores last week, the risks are increasing as the VN-Index has approached the psychological resistance zone of 990-1,000 points.

“Selling force is likely to appear from this resistance area, causing the VN-Index to correct deeply,” SSI said.

“This is a strong psychological resistance zone, therefore, we believe that the index may face correction and volatility pressure,” he said.

“The market will experience a fluctuation and wide divergence among stock sectors. The capital may flow into stock sectors that have yet to increase for profit,” he added.

The analyst group from MB Securities Joint Stock Company (MBS) has a very positive view on market movements this week.

MBS said that the market's strong support from blue-chips showed the VN-Index was very likely to reach the 1,000-point resistance.

The liquidity in the last four trading sessions was also positive compared to the sideways period from June onwards, they said.

The large-cap stocks that have accumulated a long time ago were rebounding strongly, boosting indices up in the near future, they said.

“Stock exposure should be maintained at 50-60 per cent of the portfolio,” said Trần Xuân Bách, a stock analyst at Bảo Việt Securities Co.

“Investors with high stock exposure may consider lowering this ratio at resistance zone 990-1000 points," he said.-VNS