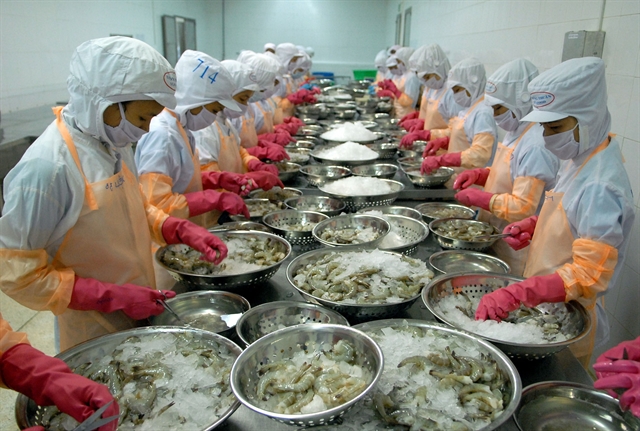 A shrimp processing line for export at Thông Thuận Company in the southern province of Ninh Thuận. Revenue from major aquatic products increased 7.1 per cent to US$0.6 billion. — VNA/VNS Photo Bùi Văn Lanh

HÀ NỘI — The agro-forestry-fisheries sector's export revenue reached about US$32.1 billion in the first eight months of this year, up 21.6 per cent, while imports were estimated at $28.8 billion, up 44.1 per cent, resulting in a trade surplus of about $3.3 billion, a fall of 48.2 per cent over the same period last year, reported the Ministry of Agriculture and Rural Development (MARD).

Revenue from major agricultural products recorded a 13.6 per cent growth to $13.9 billion, while forestry exports rose 42.7 per cent to $11.2 billion, and aquatic products’ revenue increased 7.1 per cent to $0.6 billion. Exports of livestock hit $286 million, up 15.9 per cent.

Despite a fall of 1.3 per cent in volume, export revenue of peppercorn still rose over 50 per cent to $666 million. However, rice and tea suffered falls in both volume and value.

The major export markets of Vietnamese agro-forestry-fisheries products were Asian countries which accounted for 41.5 per cent of market share, followed by the Americas with 31.3 per cent, Europe 11.3 per cent, Africa 1.9 per cent and Oceania 1.5 per cent.

The US remained the biggest market of the sector with consumption of $9.3 billion worth of products, accounting for 29.1 per cent of the market share. It was followed by China with 18.9 per cent market share.

In the first eight months of this year, Việt Nam imported $28.8 billion of agro-forestry-fisheries products, up 44.1 per cent year on year, including $2.9 billion worth of goods (mostly cashew nuts) from Cambodia and $2.7 billion from the US.

In August alone, the sector earned nearly $3.4 billion from exports, down 21.6 per cent over the same time last year and 22 per cent compared to the previous month.

Downturn was seen in export revenue of the majority of products, except for cassava, grain and milk products.

The sharpest fall was seen in the export value of furniture at over 50 per cent, followed by tra fish at 30 per cent, vegetables nearly 26 per cent, fertiliser 24 per cent, and peppercorn 21.5 per cent.

The ministry explained that COVID-19 impacts forced factories to slow down operations or even shut, affecting production for export.

The MARD said that for the rest of the year, it ould continue to strengthen trade promotion to increase exports, while supporting localities and businesses in exporting farm produce, coordinating with relevant agencies and representative offices abroad to give market forecasts, and applying online assessment on agricultural products. — VNS